Yes, it is. But it is more than just that. Red Earth Diaries is founded on four primary pillars; It’s

The central message of the book is for everyone to chase their dreams – however distant and impossible they may seem. Moving to Australia has been one seemingly impossible goal I had set decades ago, and I likewise urge the reader to shed all reservations and to dream the wildest dreams possible. This is a universal theme, and one which, I am hoping, will resonate (and motivate) people from all walks of life to become better versions of themselves.

Is Red Earth Diaries the first book that you have written?

It is my first travelogue, but I have also written (and self-published) some self-help books for fellow migrants arriving in Australia under my Migrant Ninja banner. For more information visit – www.migrantninja.com.au

How is Red Earth Diaries different from any other travelogue?

It’s a travelogue which encompasses our travels of two months in Australia; but it also has three additional concurrent themes – it’s a love story, as we had recently married prior our move to Australia; it’s a migrants journal, as it sheds light on our struggles and apprehensions as new arrivals; and it’s a motivational story which inspires the reader to chase his dreams.

How long did it take you to complete writing the book?

All in all, it took me a good five years. I came up with the idea and penned the first few chapters in 2015, however, the going was slow, and I barely wrote anything after the first burst of excitement. It must be noted that there was a lot going on in my life. I was in a casual job which involved shift work, we were blessed with our first child in 2017, and we were still grappling with many things in the new country. Things came back on track in 2018, once we moved to Port Hedland in Western Australia, but we were soon blessed with Bub No.2, and all of my priorities shifted once again. The book (and the project) was thus written in sporadic bursts, and with large gaps in between whenever the demands of day to day living took over. I guess, in a way this book reiterates the fact that when you chase your dream relentlessly you are able to overcome any hurdle and face any challenge head on.

Did you really blow away all your money during the trip?

Well, almost all of it. Having arrived as migrants in Australia with no job in hand and no real fall-back plan, we had all the odds stacked up against us. That did not deter us from embarking on our backpacking trip, though. We had kept some financial reserves so that we could survive for at least three months after the trip. By then, we hoped to get some sort of employment by then. In hindsight, it was one bold move; foolhardy some would be quick to say!

Why donate a percentage of your profits from the first year to Red Cross (5%) and Help Age, India (5%)?

Red Cross: The 2019 bush fires in Australia were unprecedented in their extent and intensity. According to the latest data, Australia-wide the affected area is in excess of 10 million hectares. This is equivalent to twice the size of the UK or nearly the size of Spain or France. It was heartbreaking to see devastation of biblical proportions, yet it was also comforting and heartwarming to see tales of survival, solidarity, resilience, and bravery emerging from the affected communities. The Red Cross and all emergency services worked relentlessly throughout the season, often in the face of certain defeat. My donation to this charity is but a small measure of the admiration for the brave folk who gave so much and pressed on during Australia’s darkest moments.

Help Age India: I’ve dedicated this book to my dad, Thomas, who was more of a friend and mentor. I lost him just as I was embarking on the next phase of my life – of marrying and migrating to Australia. Papa, as I fondly called him, was more a friend to me than a parent. Despite our considerable age difference, there were never any barriers. In between ship voyages and solo backpacking treks, he taught me the art of simple living, gave me the courage to face life’s toughest challenges and instilled in me the virtues of persistence and patience.

My dad was present on the day I proposed to Ambika. I remember him hugging Ambika tightly, saying almost half-jokingly, ‘I will now not mind bidding adieu to this life, because I know that Jason is in good hands.’

From that moment on, life accelerated. Ambika and I busied ourselves with the marriage preparations and migration plans. My dad, who had been diagnosed with prostate cancer a few months prior, was given a clean chit post-surgery. He was, however, slowing down and his health was deteriorating. I failed to recognize the signs that he was slowly fading away. Just a few weeks before the wedding, he suffered a massive heart attack and died. The only consolation for me was the fact that I was at his side when he breathed his last.

There is a special reference about our time together in Chapter 13 – Where the Rainforest meets the Sea.

What were the highlights of your trip?

Several actually. Our first dive experience in a shark tank, our visit on a chartered plane to Whitehaven beach- ranked as one of the most beautiful beaches in the world, our drive along the iconic Great Ocean Road, a visit to Parliament House in Canberra, our initiation as backpackers in a budget backpacker resort….well, I could go on, but you’d be better off reading the whole story.

What was your experience as a newly arrived migrant couple during the trip?

Quite pleasant actually. Australia is a land of migrants after all. Not once did we feel threatened as tourists or experienced any kind of racism at all. This is true for our experience to date…all six years of living here. Most Australians that we have come across and dealt with have always been respectful and courteous.

Why the wedding dress, the two backpacks and the wheelie bag? They don’t go along with each other at all.

I’m glad you asked. Well, our photo sums up the entire storyline: we were newlywed migrants: hence the wedding attire; in search of a job: hence the wheelie bag; but we were also on an extended backpacking trip: hence the backpacks.

But, you’d be surprised to know the story behind the photo. Stay tuned, because this is a story in itself!

Any twists in the tale?

Some unusual experiences and encounters mentioned in the book:

A Bollywood dance on the desolate shores of Cape Tribulation, a chapter named ‘Daal, Roti and War stories’, an encounter with a Good Samaritan who gave us a lift, a job offer during the trip which almost happened but just as quickly fizzled out, a chance discovery of a grove of trees thought to have been extinct for over two million years, to name a few. And then there is the high mass celebration by the bishop in the most venerable church in Sydney which just happened to be on our first wedding anniversary. Really…you’ve got to read the book!

Inspiring the traveller in you

Coming in 2021 Red Earth Diaries will challenge everything you've ever thought you couldn't do.

Hold on to your dreams...you never know which one will come true! 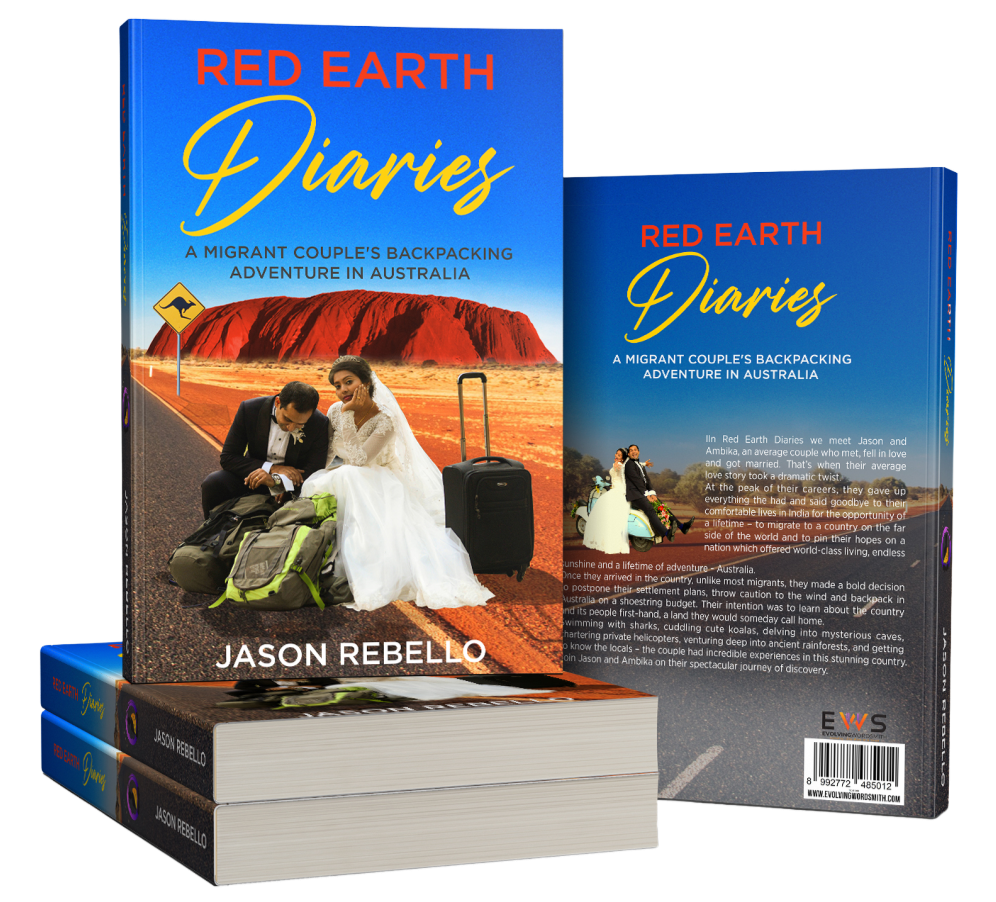 Would you like to read more stories and share in the travel adventures of The Evolving Wordsmith aka The Evolving Backpacker?